Home / About us / Regions / Western Australia

The main cherry growing regions in WA are located in a narrow growing belt stretching from Donnybrook to Pemberton in the south west of the state. This region involves some larger growers in the Donnybrook/Kirup and Manjimup/Pemberton areas and smaller ones through the Balingup and Bridgetown shires. This belt produces approximately 85% of WA cherries. Other smaller areas are located between the Mt Barker and Albany region with a few growers in the Dwellingup area and Perth Hills.

The main production season is mid December to late January, with some early varieties starting in early November and can last until February with later varieties.

A large number of other varieties have been introduced recently. The best performing of these are Ferprime, Simone, early Sweet, Royal Rainier, Sweet Georgia, Kordia, Stella, Chelan, Earlise and Australise. There have been a lot of new and untried varieties planted across the growing regions. These include Sandra Rose, Sweet Early, Red Crystal, Celeste, Samba, Index and Symphony. 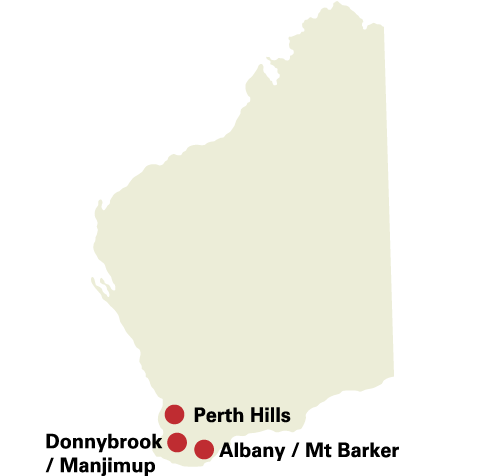