Home / About us / Regions / South Australia

There are 3 cherry production areas in South Australia. The major one is the Mount Lofty Ranges (commonly referred to as the “Adelaide Hills”). The other 2 are located in the Riverland region and the South East of South Australia.

The “Adelaide Hills” is the most significant region producing approximately 90–95% of the state’s cherry production. This area is subdivided into several smaller areas which have all developed to take advantage of specific microclimate and maturity niches. Although geographically small in area the maturity times within the Adelaide Hills can vary by up to 2-3 weeks for the same variety. Sub-regions include Montacute (earliest area), Cherryville, Norton Summit, Basket Range, Summertown, Uraidla, Forest Range, Lenswood, Kenton Valley and Gumeracha.

A small area south of the Adelaide hills known as the Fleurieu Peninsula also has a small amount of cherry production. The growers in this area are small and focus on local market sales. The South East region is a relatively new area that focuses on local region sales. The “Riverland” region, to the north east of Adelaide is an early production area focusing on producing early fruit for the eastern states and Western Australian markets.

The main production season is mid November to mid January, with some early varieties starting in mid October (Riverland). It can last until late January with the newer later maturing varieties.

More than 50 varieties are currently being grown. However as buyers are starting to demand improved quality and longer shelf life many of the older and poorer performing varieties are being replaced. Stella and Lapin are the dominant varieties grown. There is a wide range of other varieties grown based primarily on the market niche a region/grower has.

Overall Merchant, Stella, Lapin, Sweetheart and Simone are the main varieties grown. Bing, Supreme, Empress, Van, Summit, Sunburst, Kordia, Vista and Lambert have had varying levels of production but are declining in popularity. Rainier is only grown by a few specialist growers. Rons Seedling is still grown by a number of growers. A large number of other varieties have been introduced recently. The best performing of these include Black Star, Earlisweet, Sweet Georgia, Chelan, Earlise, Australise, Santina, Samba, Sylvia and Regina. 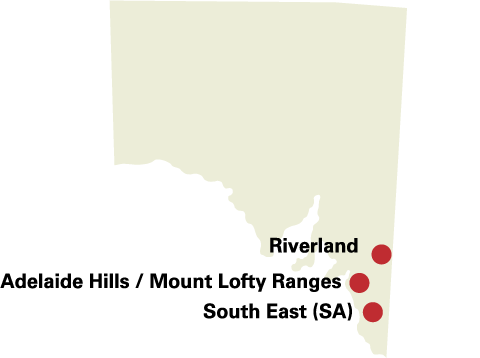