The main cherry producing areas of NSW have traditionally been around the centres of Young and Orange. Newer areas include Hillston, Mudgee, Wellington, Tumut and Batlow. These new areas have started growing cherries to try to extend the NSW cherry season.

Hillston and Narromine regions aims to produce the earliest cherries in Australia. Wellington and Mudgee are also considered early maturing areas. Early maturing cherries may have greater fluctuating yields (seasonal influences) or may not yield as much as later maturing varieties but do obtain market premium prices.

Other regions around central west NSW are being developed to ensure continuity of supply. This region of NSW offers a diverse range of suitable micro climates and elevations that assist the continuos production of good quality fresh cherries.

The cherry season in NSW starts around late October (Hillston and Narromine) and continues through Christmas finishing around mid January. A number of varieties and growing areas are used to achieve this extensive spread in fruit maturity. Most farms will select early, mid and late varieties so that if a rain event hits one of the varieties there are others that may cover these crop losses. 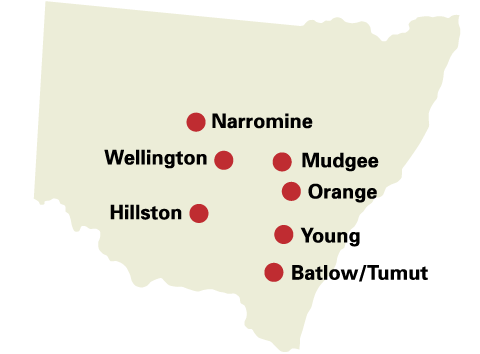